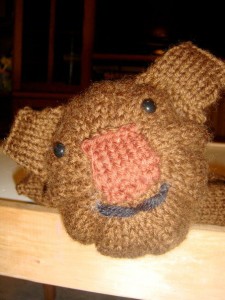 fade and I have the same knitting book: “The World of Knitted Toys” by Kath Dalmeny. I have made a large number of Amigurumis and they are super cute but the crocheted creatures always have some mild coherence problems. No matter how tight I pull the magic circle closed, I can always see white dots of polyfill through the tips of legs and the top of the head. The weave isn’t tight enough and polyfill shows through. We decided to do a knit-along to try something different with a new technique and fade picked the wombat. It’s easy! It’s straight forward! It’s adorable! What could possibly go wrong?

My wombat didn’t come out. I knew something wasn’t quite right when I made his body but I pushed on through. He is full of shame. He is a wombat. Of shame. I have no idea what went wrong. The pattern was mostly making squares! And yet here he is. Not looking anything like a wombat. At all. I looked him up on Ravelry (where you can friend me as multiplexer…) and it looks like the fault is the pattern, not our inability to knit. All the wombats from that pattern are full of sadness and shame. Shame wombats. Sad.

We’ll make something else but I heard something about a request for a Jayne hat. Knitpicks Wool of the Andes yarn totally has the right colors and I found a pattern…

I have learned lessons from the Wombat of Shame!

– The weave on a knitted toy is tighter than an ami so no polyfill shows through.
– The toy is overall softer, squishier and more toy-like.
– Makes a much larger toy with far less yarn.

– Knitting has fewer weapons for sculpting than crotchet so getting a nice rounded ear requires more elaborate measures and careful counting.
– About 5x longer to make a knitted toy than a croteched toy.
– The increases/decreases much more difficult than the same crotched.

Overall it was a pretty positive experience. I’ll totally make another one. Hopefully it won’t also be full of SHAME.