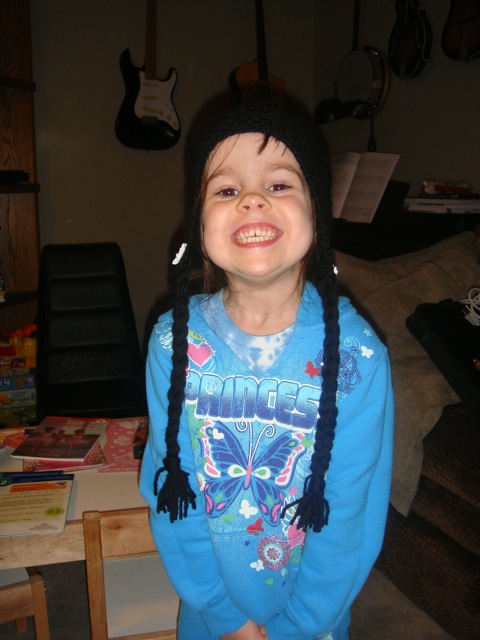 I made this hat out of a pattern from One Skein Wonders by Judith Durant. The book is a little hit or miss but some of the patterns are fun. It took me two tries to get this hat right and I had to adjust my approach but it came out looking like the picture but in black instead of purple. It has exciting features!

* It is hat shaped, hat sized, and fits on heads that may choose to wear hats.
* It has a 4 inch band of seed stitching along the headband for a neat look.
* Earflaps!
* Two long braids, one from each earflap.
* Special flower bling!

My Special Model looks great in the hat. She especially likes that she can smack me with the braids. Knitting a hat is slower than crochet so the hat took about 8-ish hours to make and about 2/3rds of 1 skein of Lion’s Brand Lion Wool, a yarn that is extremely OK.

This has emboldened me to try a single sock. GASP!

Anyone have a SotU drinking game?