Review: Don’t Turn Your Back Boardgame

We offered to Playtest the new Evil Hat Kickstarted Board Game, “Don’t Turn Your Back”. The version we played is functionally complete: all the cards, the board, and the accessories contain final art exercising the final ruleset. The game board came printed on test backing but that made no perceptible difference to game play. What does make a major difference is our third player, age 10.

Is Don’t Turn Your Back easy and fun enough for a 10-year-old to play? If it is, than anyone can learn to play and enjoy the game. If not, then the game is too fiddly with too many over-complicated rules.

Our box is actually a manila envelope, so we cannot make any comments at this time on the unboxing experience. The overall game art is consistent with the art direction and themes from Evil Hat’s Don’t Rest Your Head RPG — that sort of dark, dreamy, gothic horror found in this genre of Horror RPG games. Note: as the game wore on, I felt it looked and felt less like Don’t Rest Your Head and more like Fallen London with manipulated photograph art.

The game has a board, four decks of cards for up to four players, four card organizer/tableaus, and a score counter sheet. The game board is bright with clear iconographic queues on what happens on the board while backed with the same photo-manipulated art from the cards. The Victorian Gothic art direction of the game drew in the 10-year-old, a bit of a proto-goth.

We laid out the board, the organizers, the decks, and the score card. Our copy did not come with score counters for the score card so we improvised.

Setting Up the Game 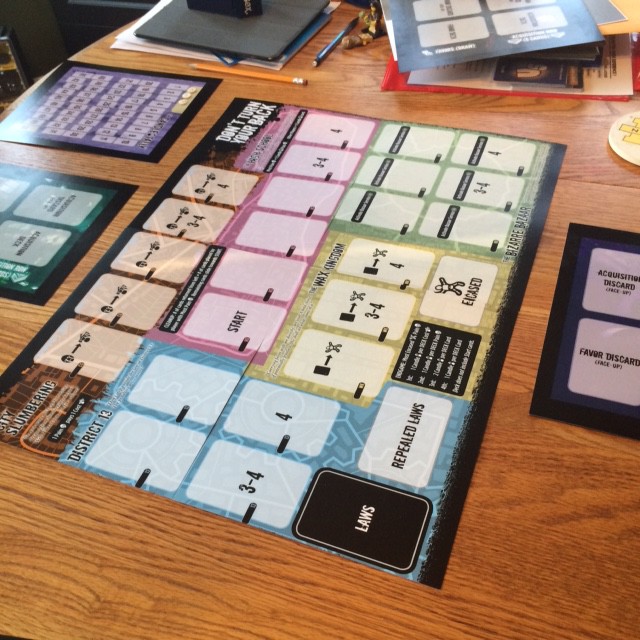 Don’t Turn Your Back is a combination deck-building game (Ascension, Star Realms, Legendary, Dominion) and Worker Placement (Lords of Waterdeep, Agricola) except with a twist – the workers are the cards in the player’s hand. During game play, players place workers from their hand in one of five possible depot: the Bazaar, District 13, the High School, the Wax King, and the City Slumbering, each with a different effect. Game rules restrict cards to depots based on identifiers on the left side of the card. For example, a player can place a card with the pink “HS” tab in the High School.

The depots have different effects:

To start, each player sorts their deck. Several of the cards have the word “START” in the upper right hand corner — these are the player’s starting (FAVOR) deck. The other work as a private (ACQUISITION) tableau. Much like any other deckbuilding game, players start with a small deck and purchase into that deck from a tableau (private, not shared) by generating buy costs. Purchased cards migrate from the tableau deck to the player’s in-play deck starting in discarded and shuffled into their main play deck.

Players play DTUB in rounds. At the start of every round, players draw up four cards from their FAVOR deck. They then play in turns, going around the table clockwise, until every player has exhausted all the cards in their hand — ie, placed cards as workers. Then effects take place (buy, score, etc.) Then played cards go to the discard and players deal four more cards.

Games are 9 or 8 rounds depending on the number of players. Each round, a new “Law” comes into play which has a special end of the round effect. When the law runs out, so does the game.

We are hyper familiar with both the deck building genre and the worker placement genre (even the 10-year-old, both a Waterdeep and Ascension fiend), so once we had decks, the board, and scoring tokens, we were ready to play. 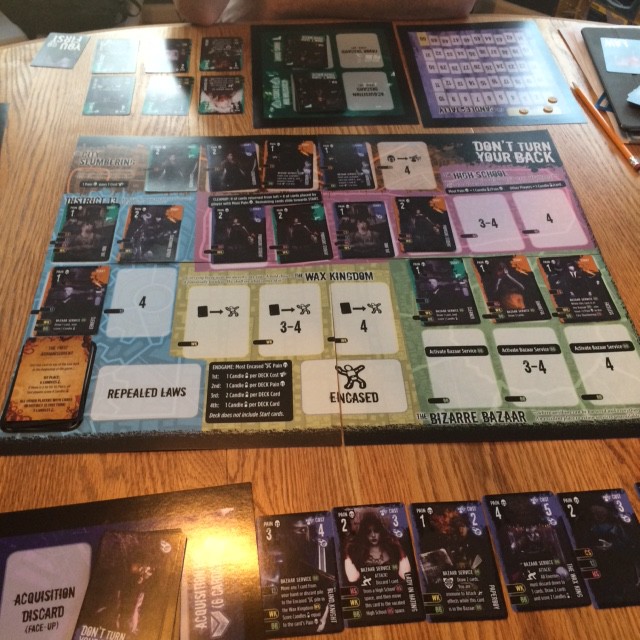 We found Don’t Turn Your Back a bit confusing in the first turn. We understood the card buy mechanic but we weren’t certain what to do with all these depots on the board and why we cared. It’s a little less intuitive at first blush than other games with similar mechanics. We also spent a bunch of time explaining the game to the 10-year-old. We also did some hand waving to figure out how to resolve all the workers at the end of every round.

Rest of the Game

Like all games, we found positives and negatives about the game play. Overall, we played 9 rounds with a game lasting approximately 45 minutes. The positives strongly outweight the negatives.

Combining deck building and worker placement feels fresh. Interesting, but once we got the hang of game play, not confusing.

The rounds go markedly faster as the game progresses and players get used to the game style. By the end of the game the rounds flowed quickly.

Every round, the “law” changes and the strategy of the turn changes with it. This makes the game feel a little strange — it’s not 100% possible to plan turn to turn. But the wacky feeling made the rounds feel fresh.

The game feels well-balanced between the different cards, the five depots, and the card actions. No card felt outsized for its cost. Nothing felt ridiculously overpowered or a sudden “winning strategy.” The game felt extensively playtested.

Flexibility – where a card can go based on where a player can place it – is a major piece of strategy going into buy, placement, and deck building. Cards don’t feel haphazard — they all work into some sort of overarching play style.

To build on that, Don’t Turn Your Back does lend itself to the Enlightenment-Only Draw Your Whole Deck strategy from Ascension. Buying more cards means buying more workers, and workers lent itself to flexibility on the board. And because everyone has their own private tableaus, everyone can run this scheme leading to “land rushes” on the board when something that turn popular.

We were occasionally confused between pain number (card strength) and cost number on the cards. We went maybe 3 rounds before realizing the pain costs != cost. Pain is on the left, cost is on the right. One runs up buy with pain, and then uses pain to buy cost. It’s a mildly confusing mechanic.

One of our players bought up nearly his whole Acquisition deck during play. Don’t Turn Your Back is a little light on cards (and variety) per deck. The game needs a little more variety — or simply a few more Acquisition cards.

Depth of strategy was a little less than I wanted because of the dearth of variety of cards to buy — although, I, personally, want games with insane depth, so your mileage may vary.

The art is dark and at times the characters on the card are hard to make out. However, the graphic design picks out game play cues on the cards in bright colors so the art doesn’t get in the way of playability. It does mean spending a bit of time staring at cards going “Wha?” 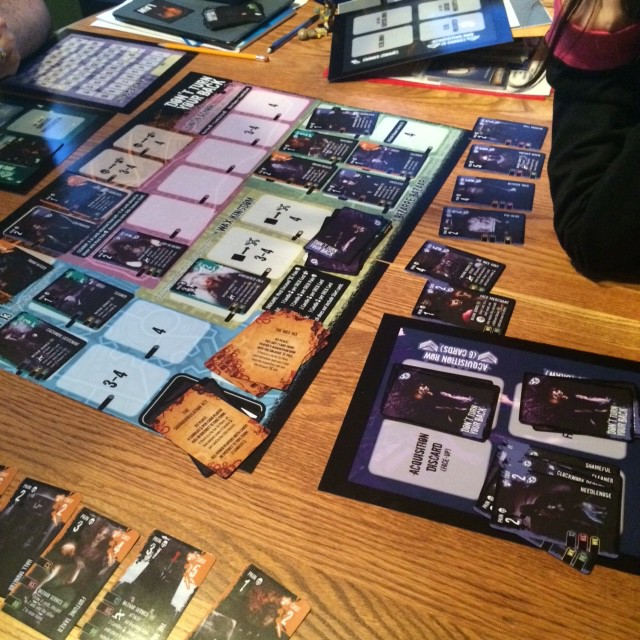 Should You Kickstart This Game?

Katie’s opinion after playing the game: “I loved it.” We bought the game.

Keep in mind, this is a deck building game with worker placement strategies, not goth Agricola. It lacks the competitiveness of the fight over the cards in the tableau and exchanges that same fight with worker placement combat on the game board. It’s an interesting twist and breathes some new life into a mouldering genre.

Kickstarters are a risk. If you’re worried the game will not materialize because the game is not complete, the game is complete. You’re dealing with professionals and mostly paying for printing. You will receive your game.

If you’re convinced, go and kickstart “Don’t Turn Your Back”.

Not quite a Waterdeep or a Sentinels of the Multiverse and little light on game depth. I wanted more out of the cards and the strategy. I want expansion decks. But Don’t Turn Your Back looks professionally polished, it was fun to play, and it was accessible to our most easily bored member of our board game group. We will likely play it again and foist it upon unsuspecting board gamers.