Work is killing me today so to lift my spirits (and the spirits of all) I offer the Daily Katie Rose.

On another thought, I am somewhat tempted to start up a blog thread just on “stuff Katie says.” The popular one today is: PROTONS ARE CUTE! 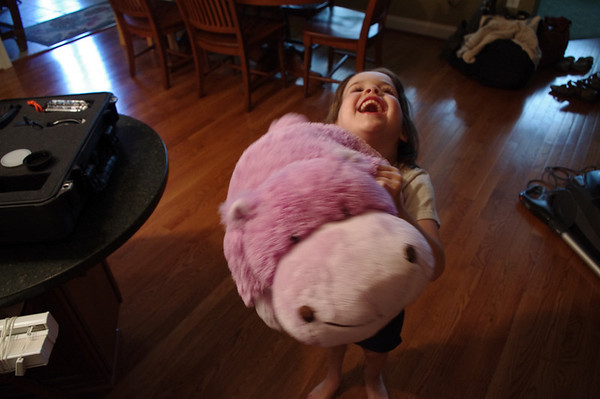 Katie desperately wants to start writing her highly elaborate stories. She has characters! Plots! Chapters! Only one problem…. She doesn’t know how to spell the words yet. Reading she has down cold. Basic sentence structure, sure. Spelling not so much.

So we’re spending hours with her asking me to spell words and then writing them down.

Spurned by the Berenstein Bears

From somewhere, Katie acquired a copy of a Berenstein Bears book. She has lots of books. They come from everywhere. It ought to be pretty non-confrontational stuff — bears go to school, bears meet some bear conflict, bears resolve conflict through bear family unity.

When I read the book to Katie yesterday evening, one passage turned my vision red, boiled my blood, clenched my fists, and made me shake in the burning need to rant. For the bears had offended me and they must die. I am plotting their fuzzy death. Bears are a menace! You see:

I was coated in feminist rage. Why couldn’t Sister Bear be good at reading and science and math? Why does she have to suck at science and math? Is she not good enough? Is the teacher not giving her enough encouragement? And what does that mean, precisely? And why are you telling my daughter who is obsessed with how brains work and how much blood is in the human body* that Sister Bear sucks at math and science!

Sister Bear goes off to compete in a spelling bee, but in this book she decides to ditch the spelling bee progression right when she was winning because she would rather go play with her friends. Friends are awesome but hey, spelling bee! Father Bear, you see, gets guilt over pushing Sister Bear competitively to defeat her enemies with words and bathe in their spelling bee entrails. He decides he should back off instead. But would he get guilt over pushing Brother Bear? I bet not. No way, man.

Girl == go ditch out of succeeding, go play with your friends. Boy == KILL.

Grrr. I prefer stuff with Princesses. At least they get swords and stuff and have to go rescue the Prince from the evil witch. And hey! She would rather go see Despicable Me anyway because she wants a Minion. Not a stuffy. An actual yellow dude Minion. 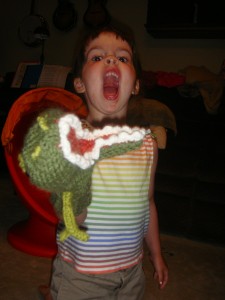 At Art Weekend 2010, I started working on the Knit Picks Critter Mitts T-Rex hand puppet. What better use for yarn is there but making awesome toys? Sure you can make socks and gloves and sweaters but you can also make hand puppets!

The first one came out well. He has a little ridge of spikes and big scary teeth and a big red mouth and little teeny tiny useless arms. He reminds me of T-Rex from Dinosaur Comics! (In fact, I may need to take more pictures and do a little photoshopping… he might be full of burgers! And atoms!)

I believe T-Rex needs a friend. One cannot just have T-Rex. The kit provides the yarn and instructions to make a triceratops. And he is orange so….

As you can see, Katie greatly appreciates T-Rex. She’s as scary as it is! RAR!

I have been fighting to get Katie interested in longer stories (books) for a year and a half now. This effort has been met with limited success: the world is full of too many interesting things to sit still for a story, even at night when winding down for bed. She is just too wiggly.

We have slowly been working through Roald Dahl’s “Charlie and the Chocolate Factory.” Katie had spurious interest in the story since it starts slowly. It takes almost 40 pages for Charlie to find the golden ticket in the second illicit candy bar in the store. But once the children started dying horribly*, Katie became intensely interested and then promptly pretended she was not interested at all.

This morning Katie was very very concerned that Charlie would be okay and not also meet some heinous fate and I told her we have to “read the book to find out what happens next.” And I cackled while she looked very put off that she would not get the answer. Yeah, we’ll finish this book as she pretends to hate the experience.

Other than my absolute favorites the Roald Dahl books, does anyone have any good recommendations of books about 150-175 pages in length for the 4-6 year olds? We have a bunch of the Disney fairy books but some of them are pretty badly written. I am still trying very hard to get Katie into the swing of a constant chunk of story/night and it’s amazing how important the writing is.

And I mean, hell, I have, what, 1500 books in the house? One does not get away with not reading books while living in a veritable library.

* The children do not die horribly. They are merely rolled off-stage by Oompa-Loompas who come up with clever songs who mock their terrible and easily avoidable fates. But hey, Augustus Gloop goes off to a fudge folding machine. I’m sure that’s pleasant.

Maybe someone on my friend’s list can answer this:

I have a four year old with a super active imagination, lots of dolls and stuffies. She is starting to get the hang of consistent rules and rulesets. What games — board games and rpg games — do you recommend for a little poo?

This weekend I got through…

– Teaching myself enough of the basics of knitting to be truly dangerous.

– Knitting with a basic garter stitch, some boucle and some fun fur 4 feet of fuzzy, goofy scarf for Katie. I just can’t sit and watch a movie.

Meanwhile my parents came over and stripped 90% of the baby wallpaper off the walls in Katie’s room and put up chair rail in preparation of turning it from a nursery to a little girl’s room. This is sort of wimpy but the paper had to come down. Sooner or later, the bears and blocks must be upgraded to bright pink dancing fairies. (Sigh)

I am extremely sore.

Yesterday, Katie stole my brand new copy of Swashbucklers of the Seven Skies and flipped through it three times!  She was very interested in the pictures.

She was very happy to see the game has:

She was very concerned the game did not have:

She was quite adamant that the game would only work with goblins.  Other than that, she declared it “interesting” and then headed off to play with other things.

We took Katie to the Maryland Science Center on the Inner Harbor on the diagonal on the water from the National Aquarium in Baltimore. The Maryland Science Center is a hand’s on science museum focusing on dinosaurs, general Earth Sciences, Newtonian physics, (incredible amounts of) Biology, Space Sciences in cooperation with NASA and whatever special exhibits they are showing that season — right now, surviving Antarctica. My impressions:

All in all, we will return to the museum. It was accessible from 95, straight forward with parking, and lots of things to mess with. It was about the same size as the National Aquarium, so it’s a 4 hour museum, not a two day mega-haul like Air and Space down on the Mall. I want to look at what the benefits of being a member are and weigh if I want a family membership or not.

Then I came home to resume my war. My Mom thinks I garden because it’s relaxing. I know I garden because I get to destroy my enemies, the weeds, with extreme justice. I’ve been working on it for the last month and I’ve actually de-garbaged it, pulled weeds, cut back plants, cut back the Rose Bush of Doom, planted more bulbs, and finally started laying down mulch. But right now I am out of mulch so I have been thwarted by reality. I don’t know what annuals are going to go into it this year. I haven’t thought that far. I am thinking things that grow big and aggressively instead of little sedate, timid things. And I am tempted by clematis on the side of the house just to see how insane the vine goes. It will need something to climb…

I’m doing a very small 3×3 vegetable garden with Katie Rose this year as an experiment in horticulture. It turns out Aerogarden has a vegetable seed-starter kit so we’re doing the daily observer-and-record cycle in the dining room while starting plants from seed. I find that I don’t care if I get a tomato out of it this year or not, but if Katie learns about how plants grow then it’s a score. After the seedlings move outside, the Aerogarden is going to be repurposed for cherry tomatoes.

It is very clear out so we’ve promised Katie Rose astronomy night. The Dob will go into the driveway and we’ll look at the Moon and see what else we can see…